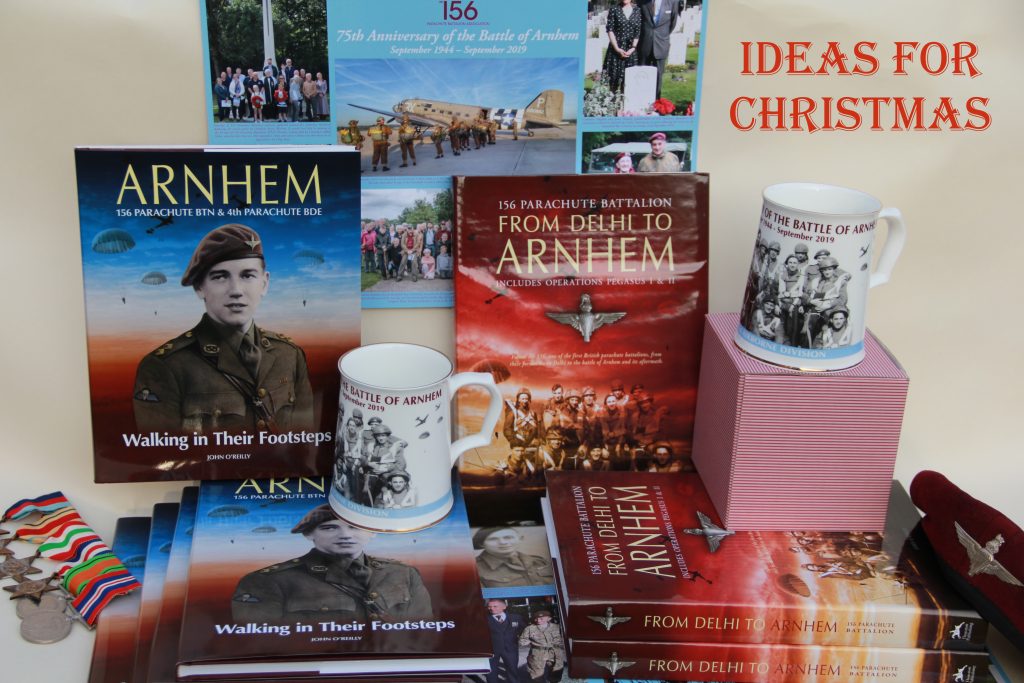 This book of 128 pages contains maps, photographs and the stories of individual soldiers.  It concentrates on Brigadier Shan Hackett’s 4th Parachute Brigade’s HQ and the 156 Parachute Battalion during the first three days of fierce fighting at Arnhem.  The book culminates in new information regarding the escape and subsequent death of two evaders and changes the previously accepted conclusion of Operation Pegasus as a result of research done by historian John Howes.

Price for members in the UK, including post and packing, is £23.00 and for overseas buyers p&p P.O.A.

From Delhi to Arnhem

This book of over 430 pages is the story of the formation of the 156 Parachute Battalion in India in 1941, the invasion of Italy, and the parachute drop in Arnhem in 1944.  It is packed with maps and photographs, whilst following the stories of 12 paratroopers from different backgrounds.  In addition, it covers much of the fighting by the 1st Airborne Division at Arnhem and describes the role played by the 156.  Much of the action includes the close-quarter fighting in the woods near Arnhem and in the streets of Oosterbeek, giving an insight into the struggle to survive of those left behind the lines after the battle, including their various escape attempts.  This Battalion’s tenacious attitude in battle and their refusal to give in contributed to the 156 suffering the highest percentage loss of all the battalions that fought at Arnhem.

Price for members in the UK, including post and packing, is £30.00 and for overseas buyers p&p P.O.A.

75th Commemorative Tankard of the Battle of Arnhem

Made of fine bone china, these tankards have been produced by the family of 156 veteran Les Lockett in their Staffordshire factory.  The tankard features the small HQ of Colonel John Waddy’s B Company.  The photograph was taken just before Arnhem by his second-in-command Hector Montgomery in 1944.  Hector lost his camera in the battle when he was seriously wounded in Wolfheze near Arnhem.

Price for members in the UK, including post and packing, is £29.00 and for overseas buyers p&p P.O.A.

Book enquiries to john.oreilly@thorotonpublishing.com or telephone 01949 851354.

TO ORDER YOUR TANKARD:

A proportion of the sale of all three items will help with the costs of the 156 Parachute Battalion Association Reunions both in Arnhem and Melton Mowbray.  In this special commemorative year, 135 people attended the 156 Reunion service in Melton and around 50 family members who went to Arnhem took part in a battlefield tour to walk in the footsteps of their relatives.

***Please  note The Fellowship  is NOT involved with the ordering process!***

December
Sixth and final Newsletter of 2018 sent out

August
Brenda Locke completed a tandem skydive on Friday  27th July in aid of the charity. If you would like to sponsor her, please use the donate button on the left hand side.

April
The Victoria Cross exhibition is currently being held at the Airborne Museum (Hartenstein). All members of the Fellowship can enter the museum with a 50% reduction on the entry fee, when their membership card is shown.

March
The layout has been changed slightly. With membership details etc at the top of the menu and the shop at the bottom.

Various pages have been updated recently