As you will be aware this year is the 75th anniversary of the Battle of Arnhem and to celebrate this milestone the Arnhem 1944 Fellowship is pleased to announce that a souvenir book will be produced and be available in September 2019.

One of the Fellowship's aims is education and so for the last few months a group of members has been working on this project and this book will cover 10 areas of action which can be looked on as standalone 'battlefield tours'. Each chapter/tour has been submitted by a different person.

The tours covered by the book are as follows in no particular order:

C Company 2nd Parachute Battalion and the railway bridge, a walk through the Rosandepolder by Marcel Anker

The 7th (Galloway) Battalion The King’s Own Scottish Borderers, a walk (or cycle tour): Planken Wambuis, Ginkel and LZ S by Robert Sigmond

A walk along the Dreijenseweg by Scott Revell

An RAMC walk round Oosterbeek by Niall Cherry

Members will be able to purchase a copy at a special price and will have priority for ordering. It will be produced in a limited print run of 500. The price to members will be around €17.50/£16.50.

The book will first be on sale in September 2019 but it is possible to express your interest in obtaining a copy by emailing the Arnhem Fellowship at info@arnhem1944fellowship.org

However, please note that priority for orders will be given to Fellowship members.

B Company Arrived - The Men 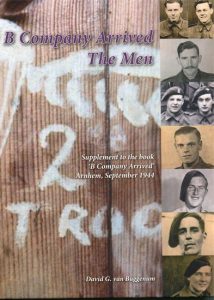 The Arnhem 1944 Fellowship is pleased to announce that one of its Life Members David van Buggenum has in September 2016 issued a supplement to his highly sought after book from 2003 called B Company Arrived. This supplement called B Company Arrived The Men contains new information received since the initial release and allows additional information on seven men from the Company to be released.
The book is a hardback, 168 pages and contains a number of colour and black and white photographs.

The first 250 copies are individually numbered and come with a facsimile copy of a boxing programme from February 1944 when a number of B Company entered the ring in a competition against BMARC, LNER Cambridge and NFS Louth.

The first sales were at the Fellowship AGM on September 16 2016 and is available in Holland from David or from Meijers and Segers bookshop in Oosterbeek.

The Fellowship are acting as the UK/RoW distributor and if you are interested in obtaining a copy please email info@arnhem1944fellowship.org

It is regretted that all our copies have now been sold but it is possible we can assist you in obtaining a copy and again please email us using the address above.

Sales to Fellowship members will be at a special discounted price.

David hard at work selling copies of his latest book 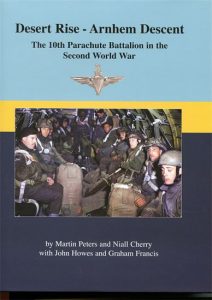 After much work we are pleased to announce that four life members of the Fellowship got together and launched in April 2016 on an unsuspecting public a book on the 10th Parachute Battalion in WW2 called Desert Rise Arnhem Descent. The main contributor was Martin Peters who had spent at least 20 years interviewing, researching and writing the story. The other three helped to put the icing on the cake and pull the story together.

Update as of September 2017
A small number of paperback copies have been reprinted and the official book launch is at 1500 on Saturday 16 September at Meijer and Siegers bookshop in Oosterbeek. it is intended  that the authors will be present and so you can get a signed copy.

This second version is a revised and enhanced edition and includes 3 new annexes and an updated nominal role. The book is 312 pages long and includes nearly 200 B&W photographs, maps and documents. It weighs 1.3 kgs.

These are some comments received about the first version of the book:

Absolutely magnificent. One of the best if not the best Arnhem book in the last 10 years.

Magnificent, thoroughly researched and well written. The use of colour maps  is great and have helped me to understand their actions greatly.

All work stopped whilst we looked at it!

Immediately goes into the top five Arnhem books ever!

Easily one of the best books on Arnhem I’ve ever read.

Easily one of the best ever Arnhem books - if you are a serious student of the battle you need this book.

Finally from the son of a member of the 10th Battalion who was at Arnhem:

I ordered the book (one of 400 in a limited edition) and had in detail, more detail than ever before, the history of the Battalion and its part in the Battle of Arnhem. There are references to my Dad and his fellow evaders; even his photograph (one I obviously supplied to Martin Peters over 20 years previously), along with that of Roy Gregory. It transported me back over 70 years, to a time in sleepy Somerby when my Dad (‘A’ Company) was billeted in large stables not far from the Stilton Cheese at the end of the High Street. There are accounts of visits to Leicester for the weekend, of training and various exercises in preparation for the Operations ahead, of many Operations which were cancelled at the last minute and of Operation Market Garden itself. I learned that the ‘Market’ was the air assault and that the ‘Garden’ was the ground assault (I’d forgotten about that). I was able to imagine the steps taken by Dad from RAF Spanhoe to the edge of the wood near Maasberg (Theo’s farm) where he and 8 others lived for 5 weeks behind enemy lines. And, of course, the account of Pegasus 1. This tome is a fitting tribute, not only to the 10th Parachute Battalion and those who served so admirably and bravely, but also to my Dad, of whom my memories will never fade but will burn all the more brightly for such a publication.
Sadly all 400 copies have now been sold but there are plans for a reprint in the future and watch this website for details.

The Fellowship is very pleased to announce that one of it's life members Robert (Bob) Hilton, after many years research and writing has produced his book on the 1st Airborne Reconnaissance Squadron in the Second World War.

The book is 256 pages long with over 280 photographs. It weighs 1.6 kg and follows on with the normal R.N. Sigmond Publishing attention to detail and quality. I felt it would be difficult to surpass 'Remember Arnhem' but this book does!

If you think you are a serious student of Arnhem then this book needs to be in your collection.

The Fellowship have obtained a limited number of copies signed by Bob and these will be despatched shortly to those members who have pre-ordered.

If you wish to order a copy please email info@arnhem1944fellowship.org
It is regretted that all our copies have now been sold but it is possible we can assist you in obtaining a copy and again please email us using the address above.

Fighting the British at Arnhem 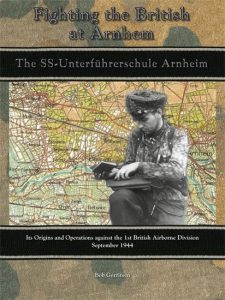 I have been advised that our life member Bob Gerritsen's book called Fighting the British at Arnhem - published by RN Sigmond Books went on  from 21/09/2018.

The book is on sale at various outlets and if you wish to obtain more information or to order a copy please email
info@arnhem1944fellowship.org 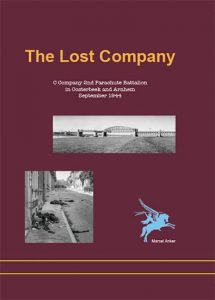 The Arnhem 1944 Fellowship is very pleased to announce that one of its life members Marcel Anker after many years research and writing has completed a book on C Company of the 2nd Parachute Battalion. Members who came on the 2015 Fellowship walk will recall him mentioning that a book was in progress and here it is!

The book is called The Lost Company and is the story of C Company 2nd Parachute Battalion, in Oosterbeek and Arnhem, September 1944, it is a hard back, 128 pages long and contains around 180 B&W photographs and is 21cm x 28cm. It is a limited edition of 200 copies and tells in great detail the actions of this company at the railway bridge in lower Oosterbeek, then around the St Elisabeths Hospital and western Arnhem and finally the few survivors who fought in the Oosterbeek pocket. They were the only rifle company from the 2nd Battalion who never made it to the road bridge.
Over the years Marcel traced and spoke to many veterans of C Company and this work forms the backbone of the book.

The book is priced to Fellowship members at £27.50 for those in the UK. Postage is extra and will depend on where the book is sent to. £32.50 if not a member.

Rest of the World orders can be taken via PayPal.

If you wish to order a copy and you are advised not to wait too long please send an email to info@arnhem1944fellowship.org  and you will be contacted in due course.

It is regretted that all our copies have now been sold but it is possible we can assist you in obtaining a copy and again please email us using the address above.